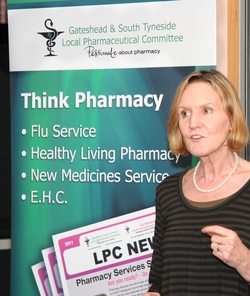 Recently, Gateshead & South Tyneside LPC held their daytime LPC meeting with a bit of a difference – they invited PSNC's Chief Executive Sue Sharpe and were delighted when she accepted. In honour of the occasion, the LPC held their meeting at the Hilton Hotel followed by an evening dinner so we could invite other local stakeholders to meet her.
Sue Sharpe is CEO of PSNC and although her background is in the legal profession,she has been heavily involved in pharmacy for a great many years. It is fair to say that her depth of knowledge of the profession is beyond that of many working pharmacists.  Sue gave a detailed presentation during the afternoon (a copy of which can be found on the Gateshead & South Tyne Side LPC site) as well as a speech at the dinner and participated in a question & answer session.During the afternoon she also saw a presentation from head of Medicines Management, Jeanette Stephenson.  It was interesting to note that a common theme in both presentations was Medicines Optimisation, and how  the skills of the pharmacist can be utilized. 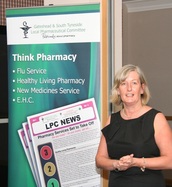 At the dinner, we also had a speech from Pam Lee from the PCT Public Health. She spoke to us about her involvement with pharmacy including the Stop Smoking Service,  NHS Health Checks and the Healthy Living Pharmacy initiative. In her closing remarks she said what really impressed her when working with pharmacists was that they were so open to new ideas, for themselves and their  whole pharmacy teams. Guests at the dinner included colleagues from other representative committees such as  GPs and Optometrists as well as key PCT personnel, Public Health, Council Members as well as colleagues from
Sunderland LPC and other neighbouring LPC’s. Several contractors' questions were put to Sue, and many of the answers can be seen on our website. Topics such
as Direct to Pharmacy arrangements & Manufacturers quotas were discussed as well as the New Medicines Service & how it can be difficult for pharmacies not located near to GP surgeries to participate. The eligibility of Internet pharmacies was also mentioned. Other questions centered around the new tariff arrangements for Specials and the reasoning behind the paper consent now required for Advanced Services.   The meeting was a resounding success. Committee members commented on what an  amazing lady Sue was - “she is so knowledgeable and speaks with great clarity about all  aspects of the profession.” It's comforting to know that she is at PSNC always arguing the corner of the pharmacist and negotiating on our behalf. One member said that after listening to Sue speak, she thought she must be "married to the job" then was amazed after chatting to her in the Ladies to find out that she was really just another working mum like her.

We have added below a whole videos from the evening.